Not an Enrollee? Enroll Now!

Not an Enrollee? Enroll Now! 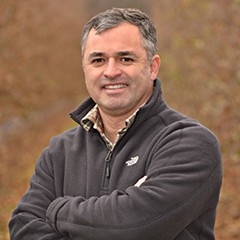 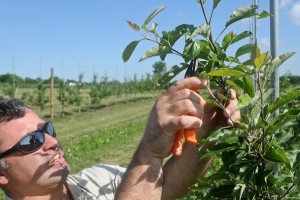 Mario, a Chilean native, is an energetic person who has always had a great curiosity for horticultural science. He received his M.S. in Horticulture and Agronomy from the University of California at Davis. Prior to joining CCE, Mario spent four years at the University of Cornell running the IR-4 field research program, and six years in Chile and California as a research agronomist. In October of 2008, he shifted his career from vegetable to fruit production and began working at his current position. His main research and extension responsibilities have focused on pruning, the testing of new Cornell Geneva® apple rootstocks, feathering of nursery apple trees, the Tall Spindle Apple system, and orchard mechanization for higher labor efficiency.

Goals of this workshop:

This workshop is targeted at Mott's growers who need to have a successful GAP audit for the 2023 harvest. However, all farms and organizations are invited to attend.

We will have several breaks, including a lunch break, scattered throughout the day, but feel free to step away whenever you need to. Lunch and snacks provided. Note: All times are approximate. Time spent on each topic varies depending on audience and questions/discussion. There will be time for questions at the end of each section and a final opportunity for questions when we close for the day.

How Profitable Will My New Orchard Investment Be? 1-day, hands-on skills class

The Eastern NY Commercial Hort Team and the Lake Ontario Fruit Team are offering a 1-day, hands-on course at 5 locations in NYS in January and February for tree fruit farms on using farm financial information and other resources to make decisions about long-term investments or changes to their business.  We will apply the techniques covered in the 8-part webinar series in December to scenarios using sample financial data from fruit farms in NYS.

In recent years, the apple leafcurling midge (ALCM) has become an increasingly problematic pest in many orchards across the northeast.

Save the Date! - Scroll down for Upcoming Events

Have you missed a meeting recently? All recorded LOFP hosted webinars can be found on our YouTube Channel https://www.youtube.com/c/LakeOntarioFruitProgram

NOW - please scroll down to find the link to the short NY Herbicide Resistance Survey!

Check out the recordings of some recent webinars:
INTERPOMA - GENEVA - WEBINAR

Did you miss the recent meeting?  Check and see if we recorded it and added it to our website or Lake Ontario Fruit Program YouTube Channel.
Honeycrisp Meetup recordings available here.
Why are my trees growing so poorly? recording available here.
Additional Recorded Webinars listing with recording and resource link are available at
https://lof.cce.cornell.edu/submission.php?id=838&crumb=crops|crops|apples|crop*38

Are you a fan of pawpaws? These custardy fruits can be hard to come across, so this guide provides information on how to grow your own pawpaw from seed, and how to care for grafted seedlings. Pdf on growing now available.​ https://lof.cce.cornell.edu/submission.php?id=799&crumb=crops|crops|unusual_fruit|crop*50

Want to move away from herbicide reliance? Are you using novel technologies to manage weeds? We want to know about it to inform our weed science research. A team of weed scientists from University of California Davis, Oregon State University, and Cornell University are asking berry, tree fruit, tree nut, and vine crop growers to take 5 to 10 minutes and answer this short and anonymous survey. Weed Technology Survey link: https://cornell.ca1.qualtrics.com/jfe/form/SV_bEpfAijoP7puQDP
For more information on this survey please visit http://blogs.cornell.edu/swd1/2020/12/02/new-weed-management-technology/

A reference table created by Janet van Zoeren and Anna Wallis, is now available at https://lof.cce.cornell.edu/submission.php?id=711&crumb=pests|pests.